Many authorities consider Serbia to be one of the leading countries globally and in Europe by number of online workers as a percentage of both the overall population and the workforce. This makes Serbia a highly interesting member of the global online work community and also necessitates research into this phenomenon’s impact on the national economy.

Many international organisations consider Serbia as one of the global leaders in respect of the number of online workers as a share of both the total population and the workforce. This makes Serbia an  interesting member of the global online work community and calls for additional research of the impact of  digital work on the national economy.

The GigmetarTM baseline report on gig work in Serbia conducted in December 2019, shall be used to measure the rate of changes on the Upwork platform at regular bimonthly intervals. The second round of the research, completed in February 2020, just before the Covid-19 outbreak, found that the number of active gig workers had grown by over 20 percent in the space of just two months.

The chart illustrates changes in the region of Serbia during the  the period under observation. It shows that the fastest growth was seen in the City of Belgrade and confirms its leading position in the  in the country. The increase in the Šumadija and Western Serbia region was smallest and  is still  lagging behind other regions.

% OF GIG WORKERS BY ADMINISTRATIVE DISTRICT

The charts below display the distribution of gig workers by administrative districts. The gig workforce is notably concentrated in 3 of the 24 districts: City of Belgrade and the Southern Bačka and Nišava districts, which host  more than two-thirds of all gig workers. Such high concentration is primarily a result of  greater population density and presence of  three of Serbia’s largest cities and university centres. As expected, during the period of observation we did not see any major changes in the concentration of gig workers by district. 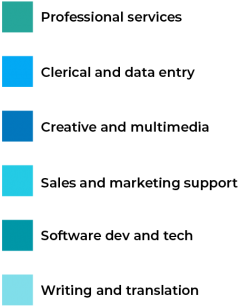 REGIONAL GIG WORKERS AS % OF TOTAL, BY OCCUPATION

The majority of gig workers in all professions comes from Belgrade, with the share exceding one-half for some occupations. For instance, 51 percent of all workers in professional services are located in Belgrade. The City of Belgrade is least dominant– though it still accounts for a large portion  of the total workforce – in the field of software development (as of December 2019) and office and data entry services (February 2020).

Trends in Vojvodina have remained largely unchanged, with equal shares for all occupations among the gig workers at the national level. This region accounts for approximately 30 percent of the Serbian gig workforce for each occupation. Most notable variations were recorded in Šumadija and Western Serbia, where nearly all occupations saw relative decline in share of the total population of gig workers between December and February. The decline was sharpest for  professional services, whereas writing and translation experienced modest growth. These trends are the consequence of relatively small number of gig workers in the region and slow entry of new workers into the market. 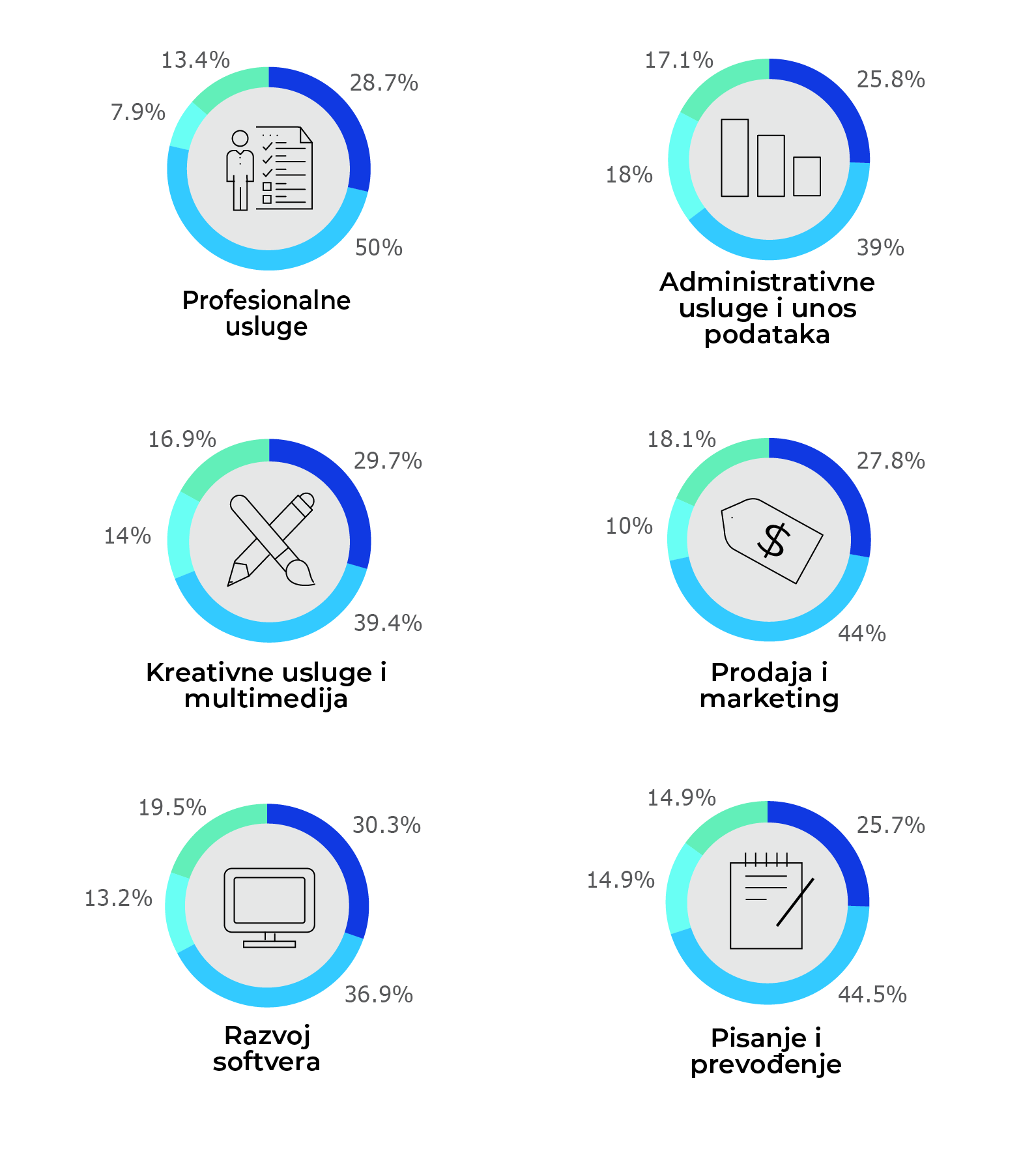 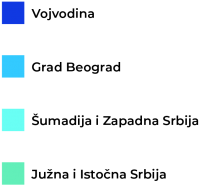 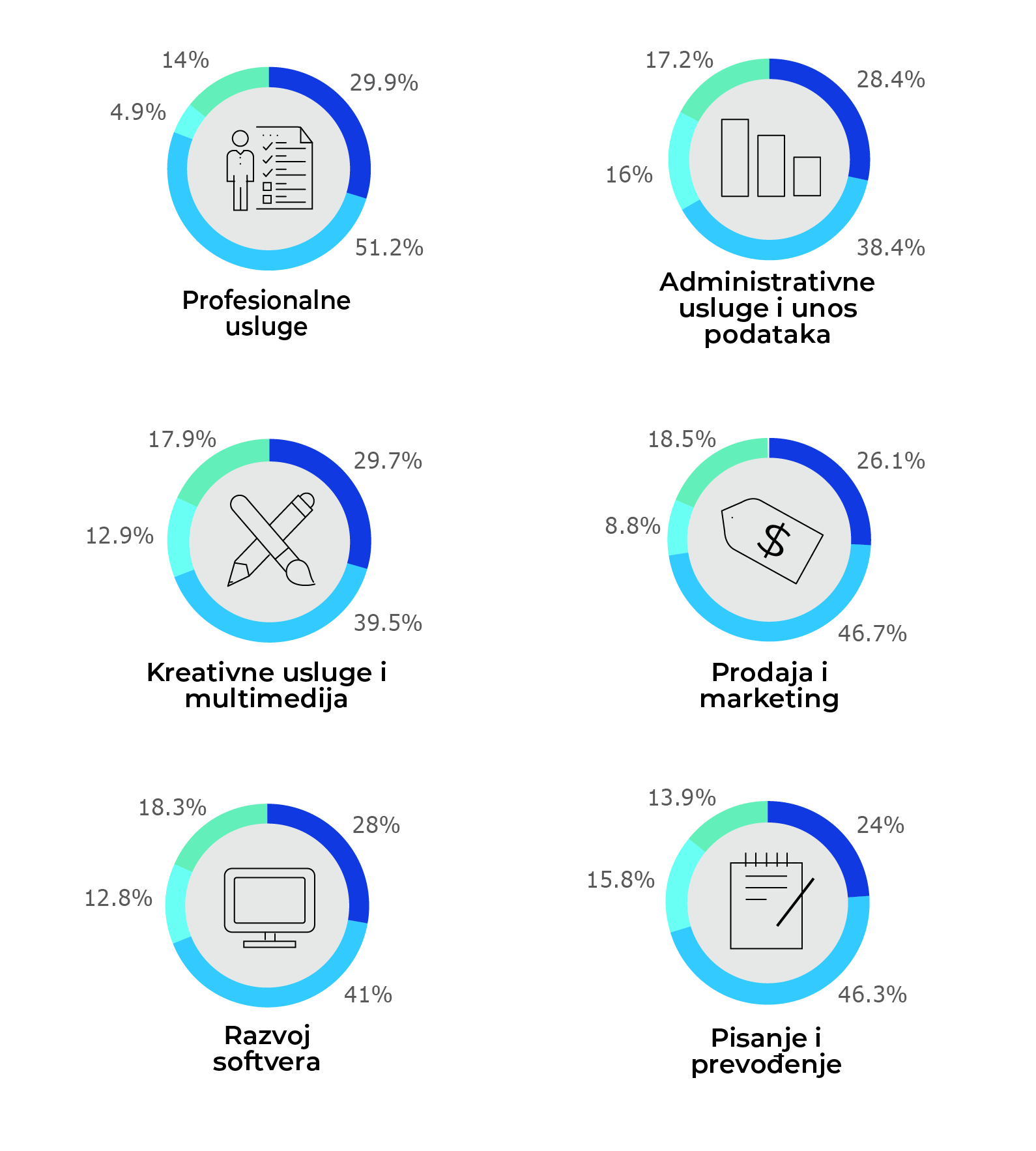 % OF REGIONAL GIG WORKERS BY OCCUPATION

The charts display the distribution of gig workers by occupation for each region in December and February. A closer look at the data reveals  relatively similar distribution of  occupations  across all regions, with creative and multimedia services and software development being  the leading professions. These two occupations experienced  both absolute and relative growth, with increased share relative to  other professions. Moreover, the data suggest that the global markets and trends influence the composition of workforce in all regions regardless of their local characteristics. 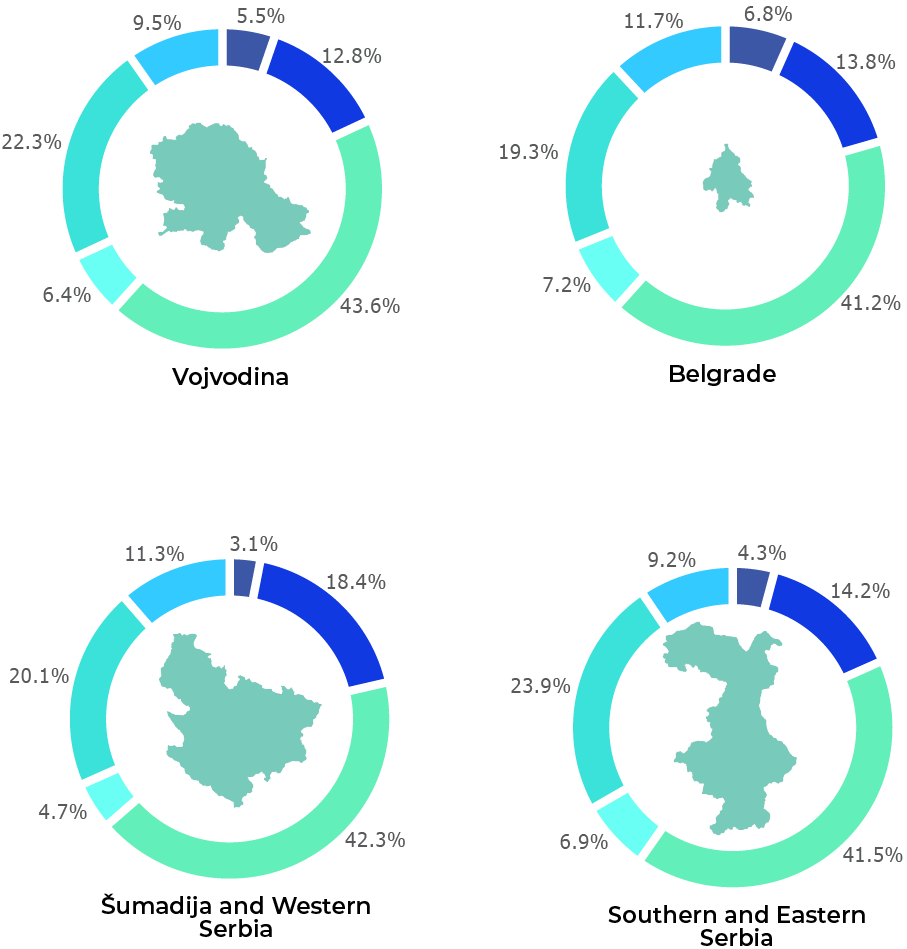 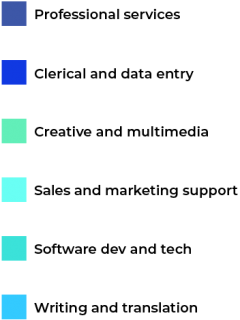 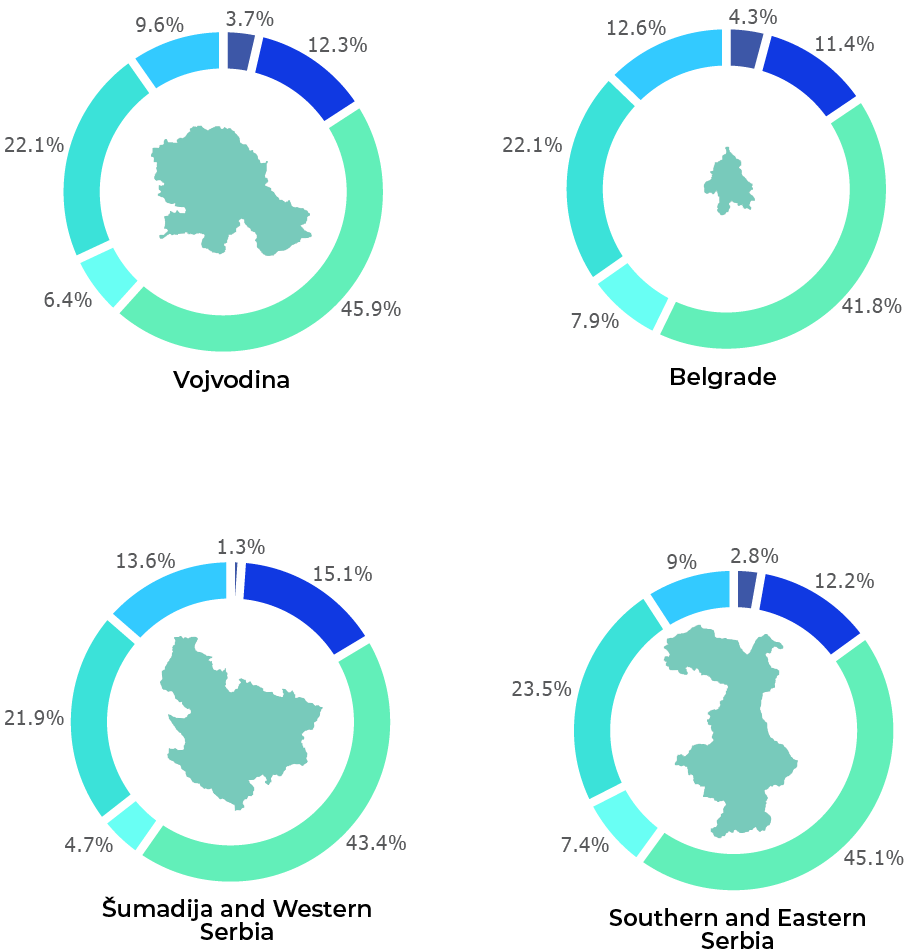 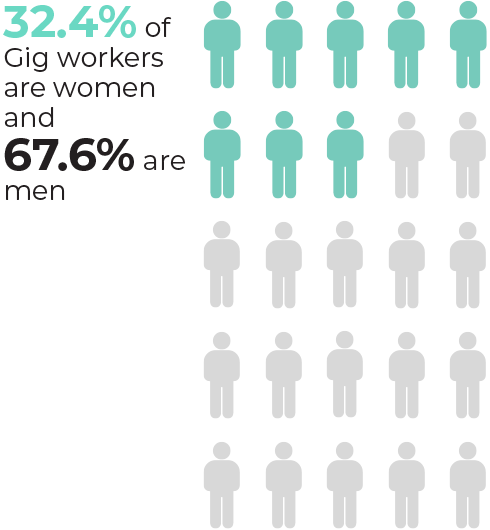 Two out of three gig workers in Serbia are men, revealing that online work remains a predominantly male pursuit. The global  landscape is similar,  as women accounted for 24 percent of the world’s freelancing workforce in early 2020. Serbia ranks better than many countries, as the share of women in the gig workforce  fluctuated between 32.4 percent in December 2019 and 31.8 percent in February 2020. 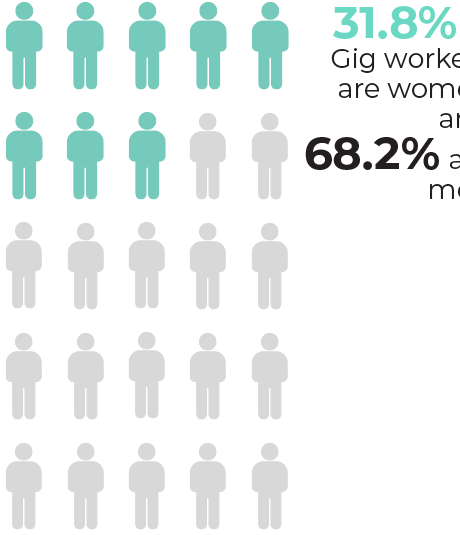 % OF GIG WORKERS BY GENDER AND OCCUPATION

The distribution of gig workers by gender across occupations is uneven. There are 8.5 times more men than women in software development. Women are in majority in writing and translation services, and have a large share in professional services and clerical and data entry jobs. 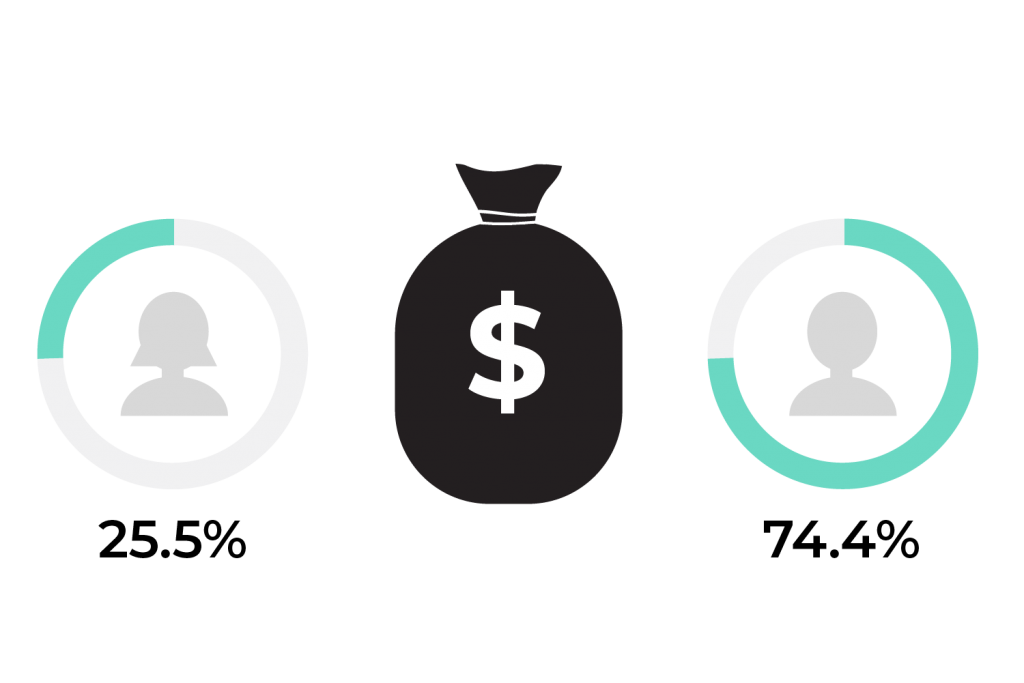 The results show that men’s share in total income is larger, they account for as much as three-quarters of all income earned. The findings also reveal that men  on average earn more than women. One of the reasons for this is that men are over-represented in occupations that, according to  research, appear to be better paid. 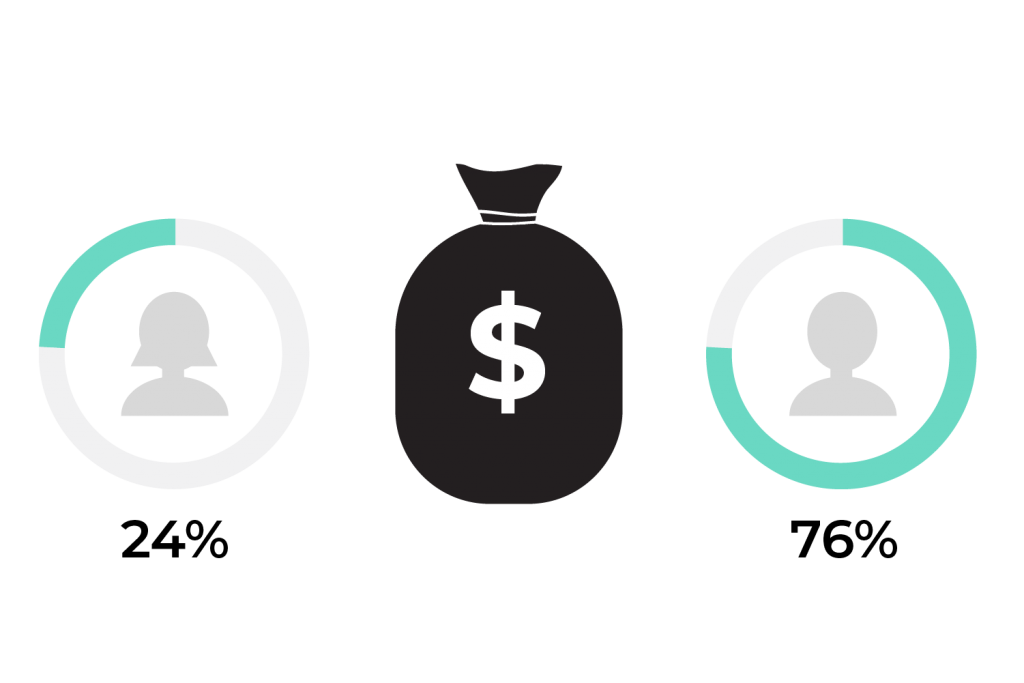 HOURLY RATES, IN US$, BY GENDER AND OCCUPATION

The average hourly rate is US$19.3, as opposed to the global average of US$21. There is, however, a large gender difference. Serbian female gig workers on average earn less than 80 percent (79.1 percent, to be exact) of the rates men are able to command, whereas at global level they earn 84 percent of men’s rates.

Hourly rates may vary  a lot  between  marketing and sales s and software development occupation, and this difference is even increased  during the the period under observation. Professional services are the only field where women were found to command slightly higher hourly rates than men in both rounds of research. These findings deviate from the globally observed tendencies, where female gig workers on average earn more in marketing, web and graphic design, and multimedia. 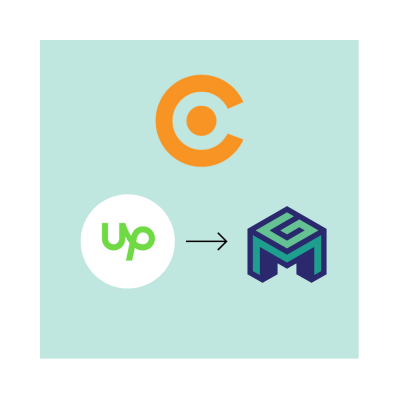